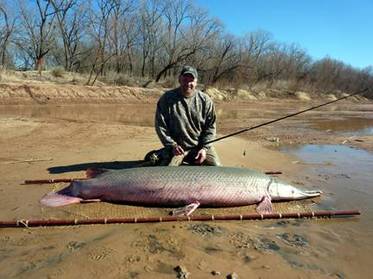 James Tucker of Ardmore pulled in a 192-pound, 1-ounce alligator gar Jan. 27 from the Red River in Love County, establishing a new state record. The record-breaking fish measured seven feet, seven and a half inches long and was an impressive three feet, three inches in girth. Tucker snagged the monstrous fish about 10 a.m. using a 65-pound test line.
Tucker's fish broke the previous alligator gar record by more than six pounds. Sean Chatham, also from Ardmore, held the former record for a 184-pound, 3-ounce fish caught from the Red River in 2006. Alligator gar are truly unique fish and can be found in warm, sluggish rivers in the southeast quarter of the state. Alligator gar feed primarily on fish, but are known to eat ducks and other water birds.

The second largest freshwater fish in North America, the alligator gar is second in size only to the white sturgeon. Reaching weights of up to 300 pounds, the alligator gar can stretch to lengths over nine feet.
Historically, the alligator gar’s home range included the Mississippi River and its tributaries from the lower reaches of the Ohio and the Missouri rivers southward to the Gulf of Mexico. Today the range is significantly smaller. The fish are primarily restricted to coastal rivers, with inland populations persisting not only in Oklahoma, but also in Florida, Georgia, Alabama, Tennessee, Arkansas, and Texas.
Female alligator gars don’t reach sexual maturity until 11 years of age, whereas males take about six years. Gar have a unique ability to use their gills or a lung-like gas bladder that enables them to come to the surface and gulp for air. Studies indicate that gizzard shad are the top food of choice when populations are present in lakes. Alligator gar also are known to eat certain sport fish as well as other gars, including their own kind. One study in Texas found they even eat coots.
Anglers once believed that the alligator gar was a significant threat to sport fish species and often were viewed as a nuisance, but today, with better knowledge of the species’ habits and behaviors, the fish is recognized as an important part of Oklahoma’s waters.
For a complete list of record fish and the procedures regarding certifying state record fish, consult the current “Oklahoma Fishing Guide” or log on to wildlifedepartment.com. Anglers who believe they may have hooked a record fish must weigh the fish on an Oklahoma State Department of Agriculture certified scale, and a Wildlife Department employee must verify the weight.